Do you believe in the paranormal?

I wish I did. Life would be more fun. But in reality, a ghost could hit me upside the head with a copy of War and Peace and I’d still find a way to explain it. Thanks to my left-brain skepticism and years of science education, a believer in the paranormal I am not.

The Bone Curse, available today, takes a rational-minded man of science and tosses him into an otherworldly situation, one with curses, dark priests, and Haitian Vodou. 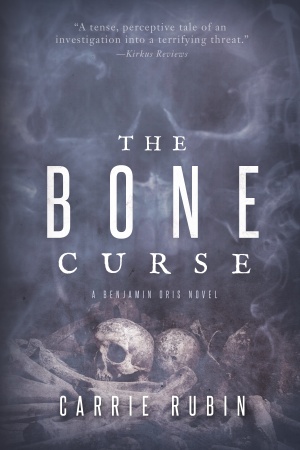 After getting cut by an old bone in the Paris catacombs, a skeptical med student must use the occult to stop a deadly curse and a vengeful priest.

Ben, the main character, is not a perfect guy. He’s a med student in Philadelphia who has worked and scrimped to attend medical school. As an introvert who keeps people at bay, he’s intense, driven, and serious, and often so focused on the endpoint, he misses out on the now.

That’s about to change. In the form of a curse. One that requires Haitian Vodou to stop it.

In some ways Ben is like me. (Well, not the promiscuous part, I promise.) I first got the idea for him as a character while watching a supernatural television show. I wondered, “What would it take to get me to believe something like that?”

I fear it would take a lot. Much like it takes Ben. But eventually, if he wants to stop the infection he’s spreading and save those around him, he must look beyond Western medicine for a cure and use the occult instead.

A lot of research went into The Bone Curse. I wanted to differentiate Vodou—which is a religion and a way of life for many Haitians—from Hollywood’s version of voodoo, with its dolls and zombies. To ensure I was being respectful and sensitive to the practice, I asked a frequent visitor to Haiti to serve as one of my early readers.

It is a thriller, and thrillers need bad guys. For Ben, that bad guy comes in the form of a dark priest who goes beyond what’s acceptable and moral in Vodou to make Ben’s life a living nightmare. Why? You’ll have to read the story to find out.

If this genre-bending, supernatural medical thriller sounds like something you’d be interested in, maybe you’ll give it a read. (Click for Amazon US link or other retail links.) If not, simply spreading the word helps immensely.

By the way, though The Bone Curse is a standalone novel, it is the first in a planned series in which Ben faces otherworldly situations. In book two, he’ll be a medical resident.

As a final note, I would like to extend a huge thank you to my publisher, Science Thrillers Media, and to everyone who received an ARC of the novel from NetGalley or from a giveaway and left early reviews, either on Goodreads or your blogs. Many of you have already spread the word on social media, and I am beyond grateful for that.

Having a book on NetGalley was a new and frightening experience for me. At some point I’ll write a post on whether I would do it again or not.

I need more distance from the experience first.

What would it take to make you believe in an evil curse?

early Reviews for the bone curse:

A Ruined Chapel by Moonlight (spoilers)

Carrie Rubin is a medical thriller author with a background in medicine and public health. For full bio and a list of her books, click here.